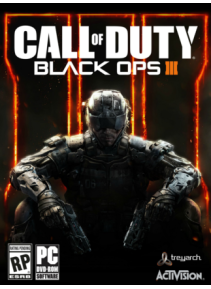 Game description:
Call of Duty: Black Ops III combines 3 modes: campaign and multiplayer game "Zombie", showing fans the most exciting and ambitious game of the series. The campaign can be played alone or in a cooperative mode that supports up to 4 players. Network mode will be the most spectacular in the series, with new features to increase rank, personalization settings and prepare for battle. A regime of "Zombie" with his own story will give players the thrill of a storm. Call of Duty: Black Ops III can be played while playing on the network or a single, and the first time for both approaches developed its own system of pumping.
You will find a number of innovations unimaginable: stunning maps, weapons, abilities, and the newest system of movement.

• Subject campaign Call of Duty: Black Ops III demonstrates a new approach to the creation of levels and is designed for co-flow four, which will give all the participants a lot of impressive cinematic moments in the best traditions of Call of Duty.
• The achieved thanks to modern technology a significant increase in the area levels will allow players to "derail" - to operate freely and independently as possible.
• Each character can be customized to the taste of the player - from the weapons and munitions used to capacity and equipment, - a development system and individual arsenal will make every moment memorable games.
• The possibility of cybernetic modification heroes significantly expands the range of character options. Implants soldiers open access to both new skills and upgrades to passive, providing new ways of movement and improve safety features.
• In Call of Duty: Black Ops III will debut an entirely new system of transportation. It will allow players to move quickly and deftly, easily combining different movements and techniques and not to lose while gun control.
• Studio Tryearch represents nine new fighters available in multiplayer mode. Each of them has a unique appearance, personality, voice, as well as their own arsenal of weapons and abilities. Each of the experts, in addition to global growth and improvement in the level of gun ownership, may also increase your rank.
• Modification of the weapons in Call of Duty: Black Ops III goes to a whole new level.
In Call of Duty: Black Ops III returns to the popular zombie mode, which debuted in the game Call of Duty: World at War. In the new game fans waiting for a separate campaign Shadows of Evil - with its own plot and full support for the system of recruitment experience.

1. You need to download and install Steam http://steampowered.com/download/SteamInstall.msi (if not already installed)
2. Register your new account on Steam or go to an existing one.
3. Go to the "My Games" and select "Activate via Steam" and enter the key received immediately after the payment.
4. After activating the game will appear in the list of games and you can download it from steam.