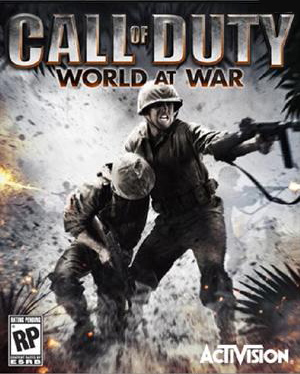 Warning: This product cannot be activated on any online platform (e.g., Steam, Origin, etc.). You have to register it while installing the game from a disc. You will have to acquire the instalation files on your own.

Call of Duty World at War will reveal details of an incredibly heavy battles of World War II. The players have to destroy the Japanese garrison on the islands of the Pacific Ocean, and crush fierce resistance among German troops destroyed quarters of Berlin, as well as to hoist the Soviet flag over the Reichstag!

In 1944, the Allied victory is not in doubt. The outcome of the war predetermined, but Hitlerites and Japanese soldiers were still facing death. The last stage of the great confrontation is approaching, and the player will be at the epicenter of events. Two intense and madly tightening campaign will be held in the Pacific islands and torn by artillery streets of Berlin.

On the atolls developed this carnage - tens of thousands of descendants of samurai turned beaches, palm groves and rocks into unapproachable defensive system. The landing of the American troops turned into a nightmare. Every millimeter of the coast sweep of machine guns and shells from the cells and the trenches at night dealt a desperate cry: "Banzaaaay!" And hundreds of soldiers seeking to throw the enemy into the sea in suicide attacks. Nobody asks for mercy, despite the enormous disparity in power. Brave American guys eager to avenge the humiliation of the first years of the war, and rush forward, despite the loss.

Last year, a terrible war. Soviet soldiers are closer to the long-awaited victory, the price of which is paid by the blood of millions - is left to overcome the last line of defense the Nazis. Bombed and dilapidated quarters of the German capital have become the latest obstacle to the triumph of Russian arms. The last fight - he was the most difficult. Do not let the Motherland, soldier!

Two magnificent campaign, historically accurate weapons, including new and trophy samples, the use of heavy equipment and defensive lines, deadly flames flamethrower - a war you´ve ever seen! There was a simultaneous passage of campaign - up to four players over a network. Amazing multiplayer game will appreciate the numerous new features and modes. On some maps you can use armored vehicles and a huge number of shelters and firing points make every shootout in a truly fascinating battle for survival.

Fight with a new, ruthless enemy in the Pacific and in the spaces of Europe in the last battles of the Second World
Immerse yourself in the thick of the online battle of infantry and armored vehicles - more weapons, new features and capabilities
Sharing the passage of online campaigns - up to four people
Excellent multiplayer game modes

Related to item "Call of Duty 5: World at War REGION FREE (not for STEAM":