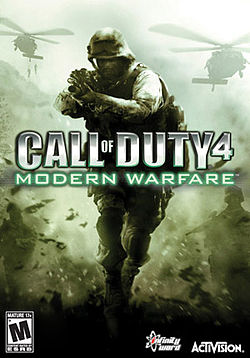 Who has not heard of the famous COD series? Now you can purchase the Call of Duty 4: Modern Warfare activation key. This time the plot revolves around terrorism and ... the USSR. It would seem, how can these things be compatible? The fact is that one group decided to re-establish communism, and in a very radical way - the threat of the Third World War. In principle, it would be possible to cope with this, if it were not a parallel problem - in the Middle East some sect decided to get to nuclear weapons. Naturally, this must be prevented. All about everything is given only a few days. But these days will last forever ...

You will fight in Eastern Europe, in the countries of the Middle East, and even in Russia. The battle will help you not only weapons, but also high-tech gadgets. Do not think that you will enjoy a pleasant walk in Russia, the Middle East and Eastern Europe. First, there will be little pleasant. Secondly, it can hardly be called a walk. Is that a run to the nearest shelter.
You will need not only accuracy, but also courage, courage, masculine spirit, a quick solution of military tasks and the ability to think strategically (and you will have to think in battle). Players will enjoy the game variety: it will have to fight in the endless expanses, and on the narrow Arab streets, which are littered with barrels, boxes and other debris.

You will be able to see more than seventy types of weapons and military gadgets for the first time.
Great multiplayer - you will move up the career ladder, winning titles and gaining additional abilities.
The player is given a choice of about ten game modes.
Graphics that will confuse any gamer (in a good way, of course).