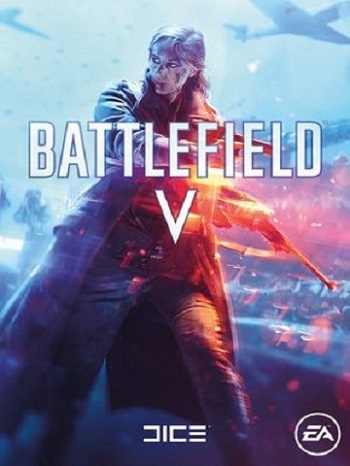 Uploaded: 15.02.2021
Content: BATTLEFIELD V_29.txt 0,25 kB
Loyalty discount! If the total amount of your purchases from the seller GameCod more than:
If you want to know your discount rate, please provide your email:

The Battlefield series is returning to its roots, depicting World War II in a whole new light. Participate in large-scale network battles, fighting with your squad in such modes as “Big Operations”, which will amaze you with the scope of what is happening, and “Joint Fights” for passing with friends, or follow the fate of individuals against the backdrop of a global confrontation in the “Military stories "single-player game. Fight in amazing, majestic places around the world, enjoying the most fascinating Battlefield in history.

GAME FEATURES:
- You have not seen such a Second World War: become a witness and participant in the key moments of the war. Battlefield is back to basics.
- Network battles for 64 players in the chaos of global war: lead your troops in intense multiplayer battles and try out new game modes, such as large-scale “Big Operations”. Test your strengths in Capture and other classic modes or team up with friends to complete Joint Fights.
- The most exciting Battlefield: maneuver on the battlefield, using new movements of fighters, fortifications and mobile means of destruction.
- Get to know previously unknown stories: follow the fate of individuals against the backdrop of global confrontation in the "Military Stories" single-player game. Ski down the slopes of the Norwegian mountains, fighting for control of the nuclear weapons supply routes. Fight shoulder to shoulder with fighters of the French colonial troops. Sow chaos in the enemy rear with a daredevil squad in North Africa.
- “The course of the war”: go along with your troops on a long journey with a constant influx of new materials, during which you will visit many key areas of the Second World War, where new battle places and equipment await you.

Instructions for activating the key in Origin:

1. Download and install EA Downloader - Origin. (Http://www.origin.com/download) = ALWAYS THE LATEST VERSION OF THE PROGRAM!
2. Start EADownloader - Origin.
3. Launch EA download manager and on the "Activation" tab enter the purchased key
4. Log in using the e-mail address and password specified during registration on the EA website. If you are not already registered on this site, then create a new account.
5. Download the distribution.

ATTENTION: After activation of the serial key in Origin, the key becomes invalid, i.e. You can not use it again.
MUST remember, and better write down all the details of your account! Without them, you will not be able to access the activated games in the future.