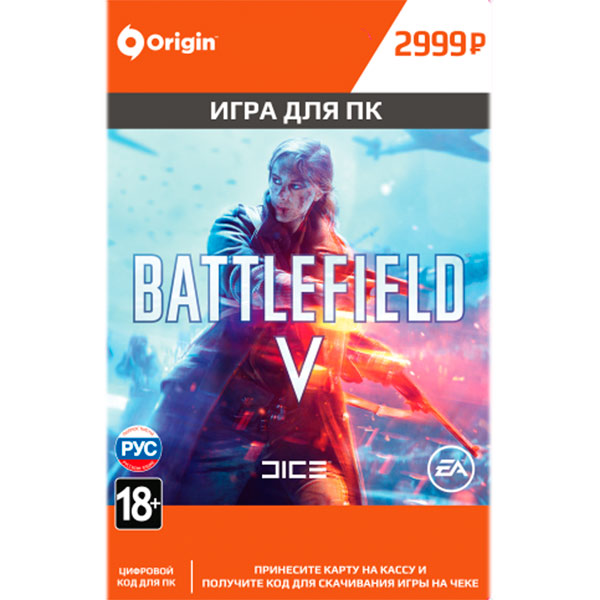 The key will come immediately after payment and will be displayed in the browser window
And it will also be duplicated to the mail you specified!

Description
Participate in the largest military conflict in human history: with
Battlefield ™ V Series Returns to Root - World War II - Portraying It in
a whole new world. Get involved in large-scale and realistic networking
battles, fighting with his squad in such regimes as "Big
operations ", which will amaze you with the scope of what is happening, or stay tuned
the fate of individuals against the backdrop of global confrontation in the "Military
stories "single-player game. Fight the unexpected
stately places around the world and enjoy the most fascinating of
all battlefield.
• You have not seen such a Second World War: become a witness and participant
unexpected and at the same time key moments of the war. Battlefield returns to
the origins.
• Network battles for 64 players in the chaos of global war: lead your
squad in intense multiplayer battles and try new game
modes, such as large-scale "Big Operations." Try your
forces in Capture and other classic modes, fighting in a squad of friends.
• The most exciting Battlefield: maneuver on the battlefield using new
fighter movements, fortifications and mobile means of destruction.
• Get to know previously unknown stories: follow the fate
individuals against the backdrop of a global confrontation in Military History
single player game. Ski down the slopes of the Norwegian mountains,
fighting for control of the nuclear weapons supply routes, strike your shoulder to
shoulder with the French colonial troops or wreak havoc on the enemy
the rear along with a detachment of daredevils in North Africa.
• "The progress of the war": free updates, thanks to which you will go to
long journey, during which you will visit many
key areas of the Second World War, where new places of battle and
equipment..

After payment, you do not need to contact the seller! The system will give you a code you bought!