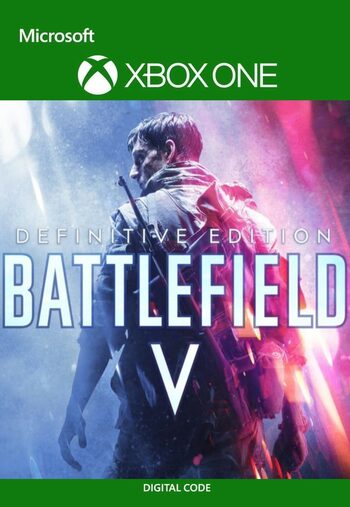 To activate the key on your account, you may need a VPN connection Argentina
This key is distributed by digital distribution method. And does not have boxes and disks.

About the game:
Experience the ultimate Battlefield V experience. Take part in the largest conflict in the history of mankind, unfolding on land, water and air, with original access to all in-game content. Use a full arsenal of weapons, equipment and devices in a convenient way, headlong into the fierce battles of World War II. Stand out on the battlefield with all the elite fighters and the best customization items released in the first and second years of the game.

Battlefield V Ultimate Edition contains the base game of Battlefield V and the most complete collection of in-game content:

- All in-game items (weapons, equipment and devices) available when the game was released, as well as those released during 2 years of its existence.
- All elite fighters.
- 84 sets of realistic equipment for the soldiers of the British and German troops, further increasing the freedom of action and choice in the battles of the Second World War.
- 8 sets of soldiers´ equipment released in the second year of the game´s existence.
- 2 weapon skins released in the second year of the game, which can be used on 10 and 4 models respectively.
- 3 finishes for appliances.
- 33 items available as Chapter Rewards for Year 1.

Instructions for activating from your phone 📠📱

1. Install the Hola Free VPN Proxy extension https://hola.org/download?list=1
2. Click on the link https://redeem.microsoft.com
3. Log in to your account ✅
4. Enable Hola and select a connection from Argentina 🌐
5. Enter the key, click next to confirm activation 👍
6. Now you can safely download the game on your XBOX ONE console 🎮 🌈

Sea of Thieves Xbox One | Windows 10