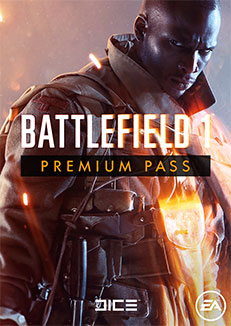 You buy DLC Battlefield 1 Premium Pass as a gift for Origin.

<Attention> Region: Russia
To use, you will need the game: Battlefield 1 </ attention>

Expand the theater of operations with the help of Premium Pass for Battlefield ™ 1. Get access to new network cards, armies and much more two weeks before the release in four thematic additions. Battle with the French army in the first supplement Battlefield ™ 1 "They will not pass." Coming soon three more additions, they are waiting for you even more cards, more weapons, even more Battlefield ™ 1.

Fight on four new fronts of the First World War:

Test near fights and large-scale tank battles on the Western Front with Battlefield ™ 1 "They will not pass."

You will find yourself on the largest front of that war together with the Russian army and fight in the snow-covered ravines and on the ice islands in the addition of Battlefield ™ 1 "In the Name of the King."

Participate in the amphibious assault operations of the First World - a desperate raid on Zeebrug and landing at Gallipoli in Battlefield ™ 1 "Waves of Change".

Use deadly tools and unique weapons to recapture territory from the enemy in the most brutal battles of that war in the latest addition of Battlefield ™ 1 "Apocalypse".

New battles at the front. Get access to the four thematic additions two weeks before the release. France will join the battle in new additions. In the coming soon supplement to the battle will enter the Russian Empire.

Priority access to the server. Do not wait in line for the server: Premium Pass is granted VIP access.

<Attention> After payment, send in a private message a unique code that you will receive after payment! The order will come as a gift to your account. </ Attention>