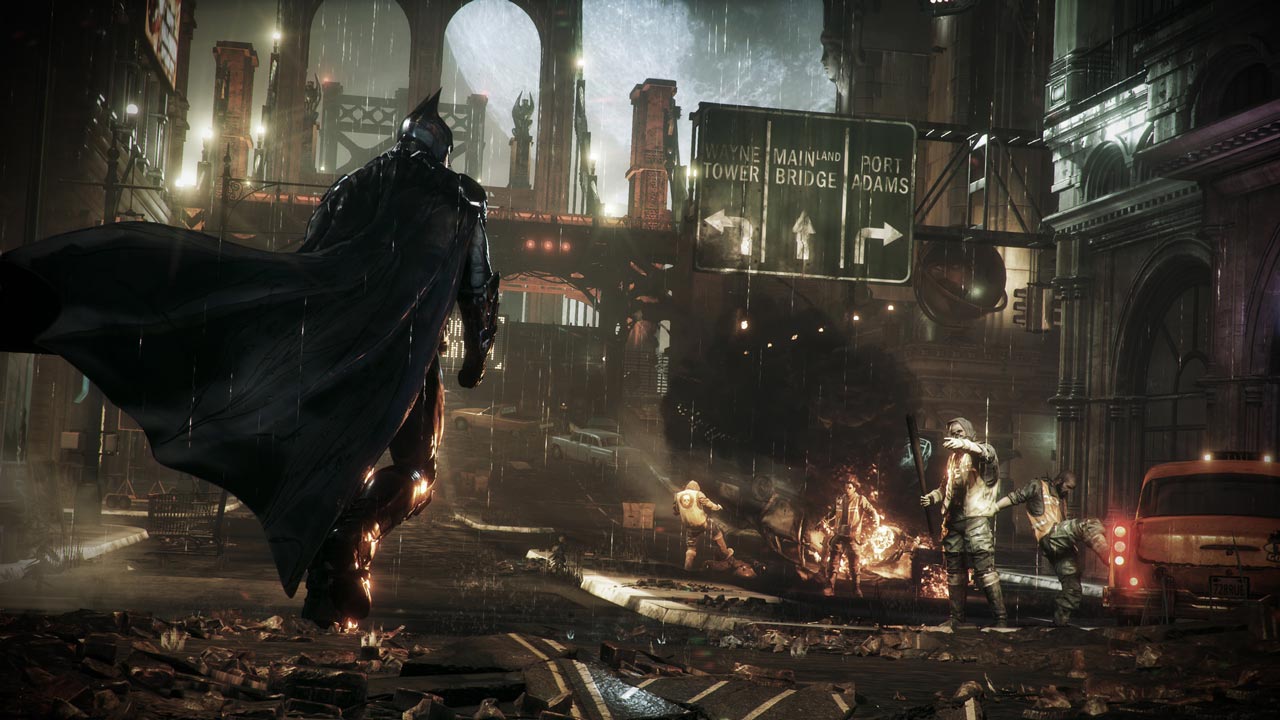 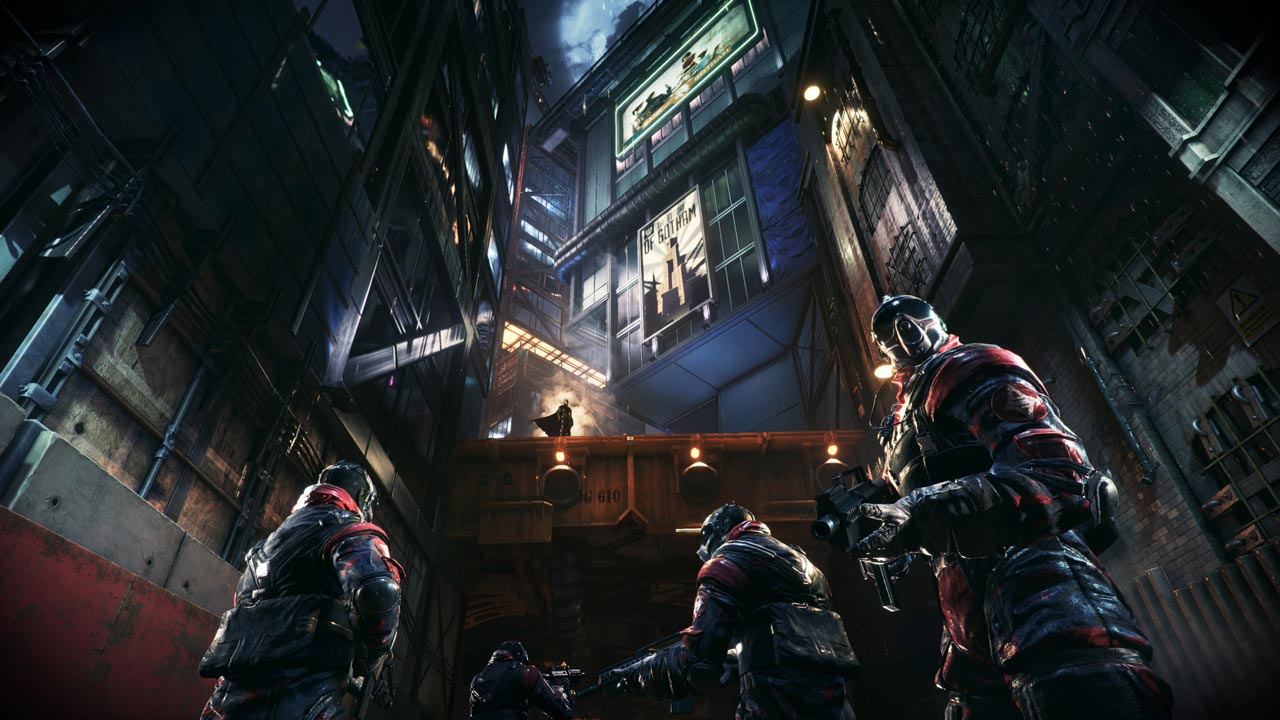 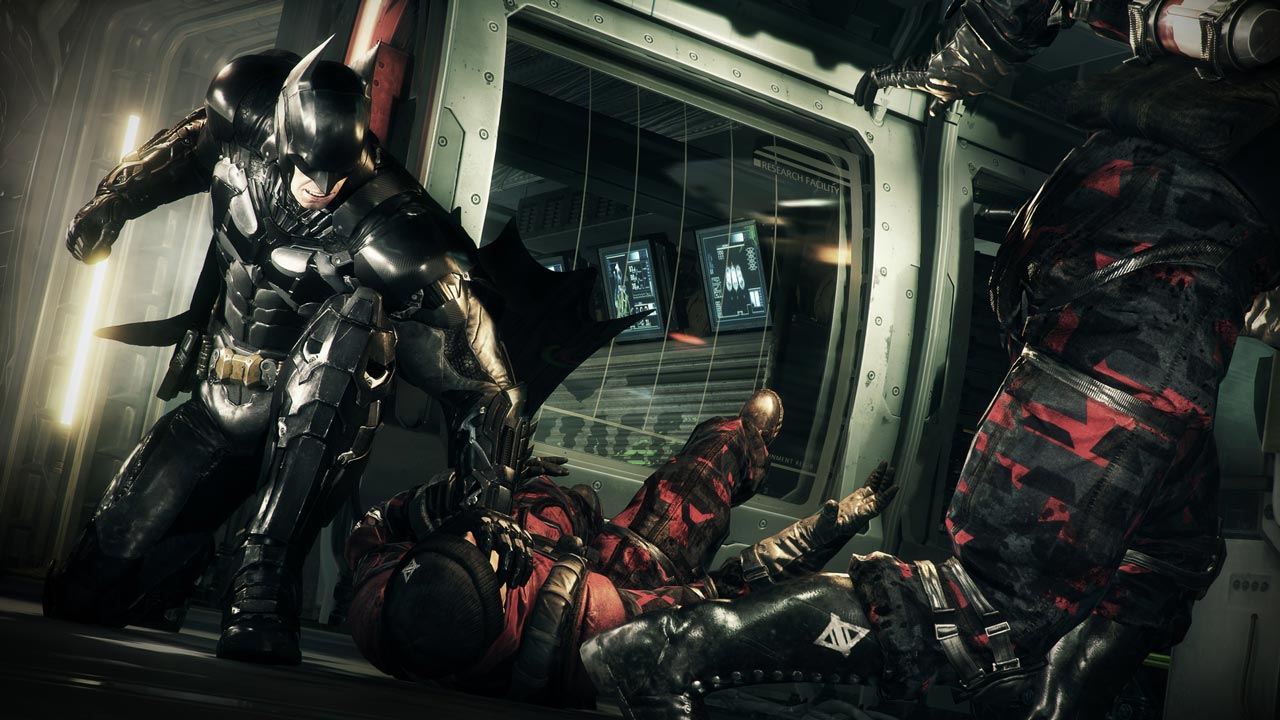 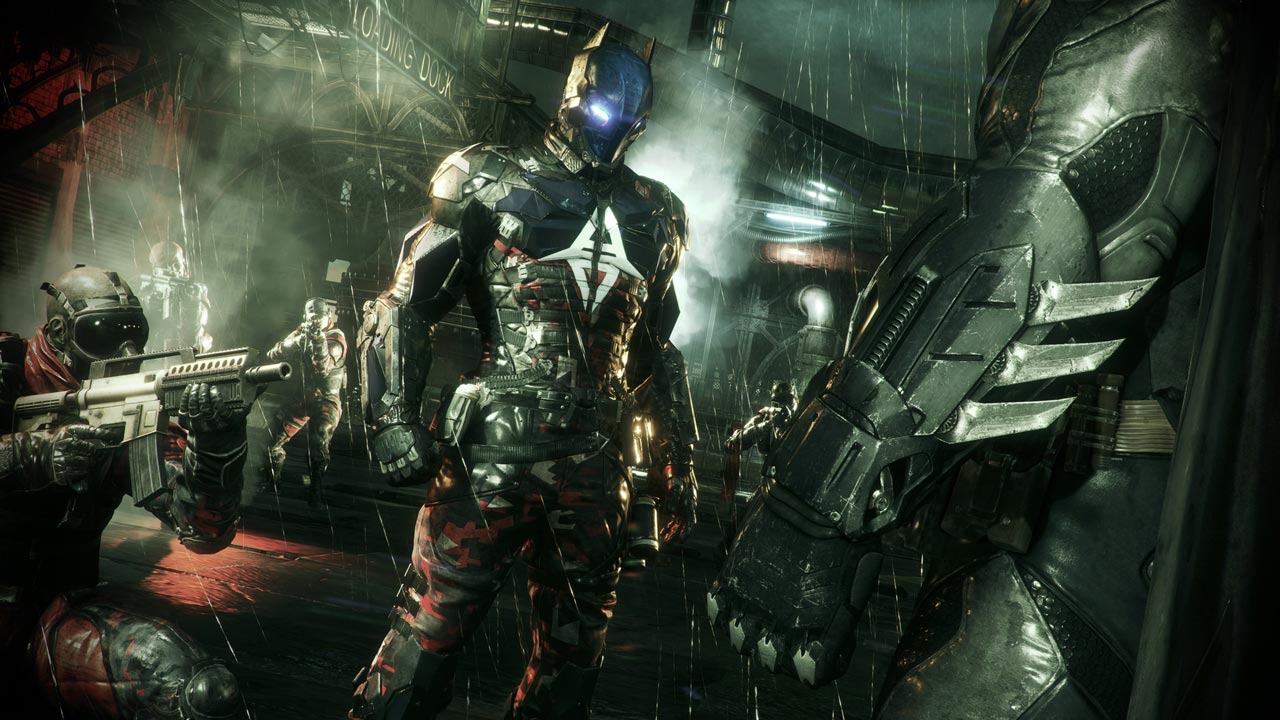 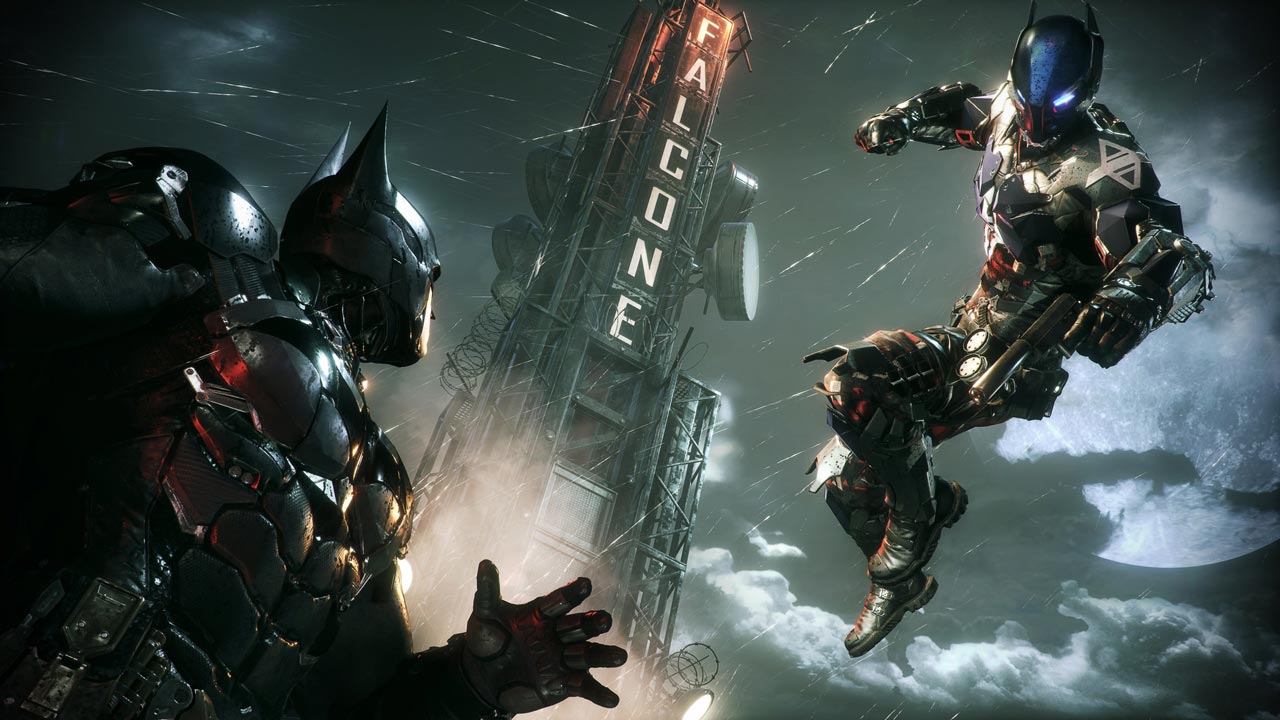 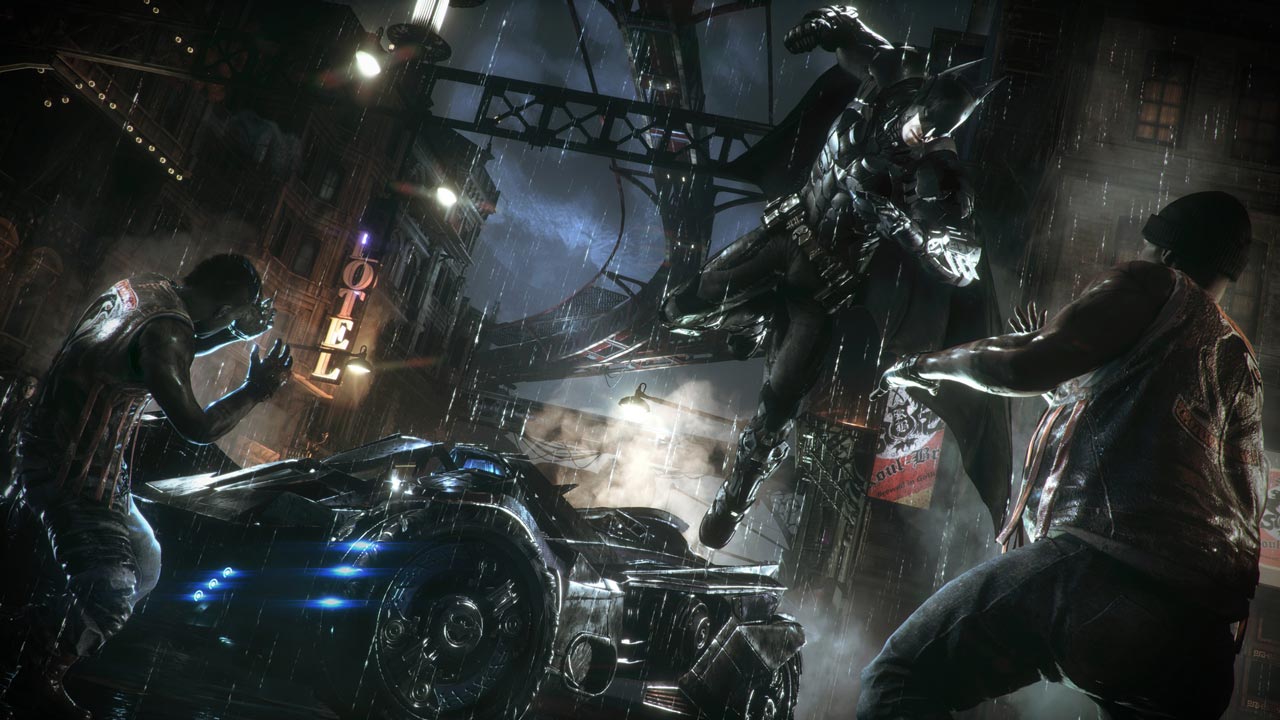 =======================================
BATMAN: Arkham Knight ceremoniously completes the famous Arkham trilogy of games from Rocksteady Studios. The game was created specifically for the next-generation platforms, and it will feature a unique version of the Batmobile. Appearances of this amazing machine have been waiting a very long time. It is designed to organically supplement the game mechanics and give the player a real sense of Batman - now he can hover above the city, and the wind rushing through its streets. Which is very handy, because never before Gotham was not threatened with such a scale - the shock final of the series brings Batman to Scarecrow, who returned to unite against him a gang of super villains and finally deal with him.

• Become Batman: in the final part of the Arkham trilogy from Rocksteady Studios is given the opportunity, as never before to get used to the role of the Dark Knight. This contributes to the Batmobile, and improvements to the branded elements of the game: the focus of continuous combat, covert action, search for evidence and navigation
• Introducing the Batmobile: the faithful machine of the Dark Knight appears before us in an updated form and with high-tech stuffing. Crazy speed and absolute patency will overtake any criminal, but in combat mode, the Batmobile becomes a real tank. He will justify his fame and get a key role in the game, helping Batman in everything from navigating and finding clues to fighting and solving puzzles. The machine and the owner will operate in a coherent manner, as one unit
• A grand finale to the Arkham trilogy: BATMAN: Arkhem´s knight will show Gotham, engulfed in war. Short skirmishes in Batman: Arkham Asylum turned into a conspiracy against the prisoners in Batman: Arkham City, and now the battle for the future of the city will start from them. We will see how his fate hangs in the balance - Gotham will fall into the clutches of Scarecrow, to which will join a new mysterious character, known only as the Knight of Arkham, as well as a crowd of famous villains: Harley Quinn, Two-faced, Penguin, Mysterious and others
• All Gotham in the palm of your hand: for the first time the entire city will be fully accessible to players. It will grow five times compared to Batman: Arkham City, and every nook and cranny will still be worked out with all the care that this series of games is so famous for
• Detecting especially dangerous criminals: players can completely immerse themselves in the chaos prevailing in the streets of Gotham. They will be provided with meetings with the largest figures of the underworld, and it will be possible to choose whether to hunt individual villains or follow the main storyline
• New tricks and devices: the arsenal of players will be replenished with new combat techniques and high-tech devices. Now Batman will be able to use betarangs, hook amplifiers and crossover on the fly, and his belt will be enriched with ultra-modern devices, irreplaceable in the detective´s work, in covert operations in enemy territory and in battle

1. You must download and install Steam http://steampowered.com/download/SteamInstall.msi (if not already installed)
2. Create a new account on Steam or go to an existing one
3. Copy the received link and paste it into the Internet browser
4. Take a gift to your library or add it to your inventory
5. After activation, the game will appear in your list of games and you can inst