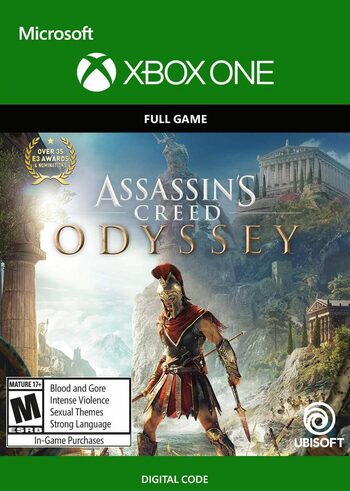 By paying for the goods, you instantly receive a 25-digit license code (a key to activate the game). The game is forever linked to your account.

WARNING !: TO ACTIVATE you need a VPN with a connection to Argentina.

Description:
Take on your own odyssey as you embark on incredible adventures in a world where every decision has consequences. Your own family has sentenced you to death, and now you have to go a long way from an outcast to the legendary hero of Greece and uncover the secret of your past. The sea and the mountains are in eternal confrontation in a war-torn world, shaped by both gods and people. You will meet the legendary representatives of Ancient Greece and become a participant in the events during a turning point in history that shaped the entire Western civilization. Key Features Become a Legendary Hero of Ancient Greece For the first time in the Assassin´s Creed series, you can choose your own character - Alexios or Kassandra. Modify equipment, upgrade abilities, personalize your ship and overcome all challenges to become a true legendary hero. Explore an extraordinary world From snow-capped mountain peaks to the depths of the Aegean Sea, from untouched corners of unbridled wilderness to the major cities of Greece´s Golden Age, explore this majestic and beautiful world. Your story will sparkle with new colors thanks to meetings with interesting people, battles with mercenaries and numerous surprises. Choose your own path More than 30 hours of dialogues with a choice of options, as well as various options for the end of the game are waiting for you. The truly living world of the game will change depending on the decisions you make. Take part in massive battles Demonstrate your unrivaled combat skills and determine the outcome of the battles in the Peloponnesian War. You will become a participant in large-scale battles between Sparta and Athens. More than 150 warriors will appear on the battlefield from each side. Conquer the Aegean Sea Find hidden treasures and corners of the world that are not on the map. Make your way by participating in major sea battles. Change the appearance of the ship, modify weapons and recruit fighters with unique skills to your team to adhere to a comfortable fighting style. Discover the Land of Myths and Legends Explore a world where myths come to life and ancient rituals are performed. You will meet famous heroes and discover what really lies behind the legends of mythical creatures such as Medusa and Minotaur. In Assassin´s Creed: Odyssey, for the first time in a series, player decisions will be paramount. You can choose a hero at the beginning of the game and personally determine his fate, building relationships with colorful characters and making important decisions during the entire journey. You will be able to personalize your gear and hone special skills to match your hero´s abilities as much as possible to your favorite play style. After going through many battles on land and at sea, your character will become a real hero, like those about whom the legends are made.

Instructions for activating from a phone without VPN: XBOX app on iOS or Android with mobile Internet enabled