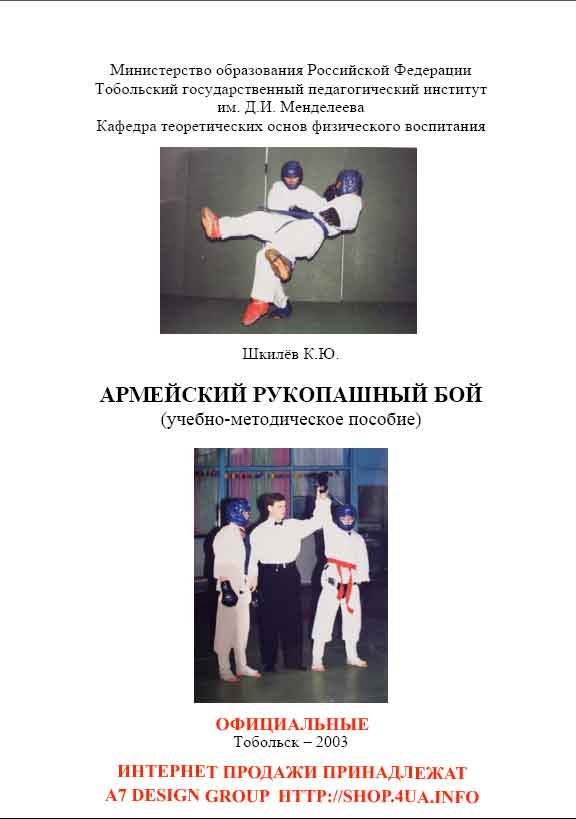 Uploaded: 17.09.2007
Content: armaiskii_boi_shop.4ua.info.rar 558,28 kB
Loyalty discount! If the total amount of your purchases from the seller A7 Design Group more than:
If you want to know your discount rate, please provide your email:

Only 6 years ago, the Army ceased to be a close fight
the monopoly of the Ministry of Defense of Russia. He is currently
also became the sport and civil, which are involved in both
adults and children alike. In April 2002, it hosted the fifth
Championship of Russia among young men.

Thanks to this spectacular sport its geography
It getting wider. Army engaged in melee combat like
in Uzbekistan and in Western Siberia and the Far East. The
Tyumen Region has been operating for three
regional federation army fighting:
Federation Yamalo-Nenets Autonomous District (Salekhard,
President Igor Pavlisky), the Federation of the Khanty-Mansiysk
autonomous region (Surgut, President Alexander Malinovsky)
and the Federation of the Tyumen region (Tobolsk, President
Constantine Shkilёv). These organizations officially
registered in the Federation Army melee
Russia. In addition to the above, there are federations
municipal federation, included in their composition. To date,
Tyumen region, there are more than 50 clubs, developing
this sport, totaling over 1500 people.

We hope that this handbook will help
instructors in their work.

This is the official book of the author Konstantin Shkilёva, prinimayutsya gratitude in the form of positive feedback comments after purchase.