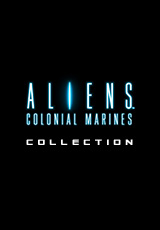 Uploaded: 30.11.2019
Content: Aliens_Colonial_Marines_Collection_7.txt 0,24 kB
Loyalty discount! If the total amount of your purchases from the seller GameCod more than:
If you want to know your discount rate, please provide your email:

Dispatch of the gift is done within 48 hours after writing a comment.
Attention!! Putting a tip - you guarantee that you read all the conditions for the Gift and if something is not clear - asked.
<Attention> For the positive feedback about the product, I will give the buyer a gift certificate in the amount of 10 rubles.
Detailed information about gift certificates https://www.oplata.info/info/card_new.asp

Deadly challenge: you are against the most dangerous creatures in the universe!
Aliens: Colonial Marines - a new game from the studio Gearbox, in the walls of which were born hits Borderlands and Brothers in Arms. This first-person shooter will take you to a world familiar to the aliens "Aliens". There, where fear keeps the most courageous fighters, and behind every turn lies deadly danger.

You and your friends will become the best soldiers in the galaxy - the colonial marines of the United States. You need not just to survive: your task is to take away from mankind a terrible alien threat!

Features:
- Fight alien creatures, using the entire arsenal of colonial marines from James Cameron´s cult film "Aliens" - impulse rifles, motion detectors and flamethrowers.
- To cope with the alien threat, you must turn into a ruthless and deadly machine, inexorably destroying Aliens. The extensive system of improvements in Aliens: Colonial Marines will allow to develop the character in exact accordance with the favorite style of the game. Earn experience points to gain new abilities, weapons and equipment for the fighters of your unit.
- Developers from Gearbox know perfectly well how to make an interesting mode of the joint game, and Aliens: Colonial Marines has reflected all the experience they have accumulated. You can always ask for help from other players. Go through the story campaign side by side with friends, as part of a detachment of up to four fighters, each of whom can join the common game and leave it at will.
- You will visit the famous ship "Sulako" and walk along the narrow corridors of the colony "Hope Hadley" on the planet LV-426. There you will have to fully experience the spirit of a gloomy and dangerous world, where your life can be cut off at any moment.

<Delivery>This product is distributed through digital distribution, it is only a pin code, and does not contain packages and boxes.</Delivery>