Adaptation of the child to the conditions of the kinder 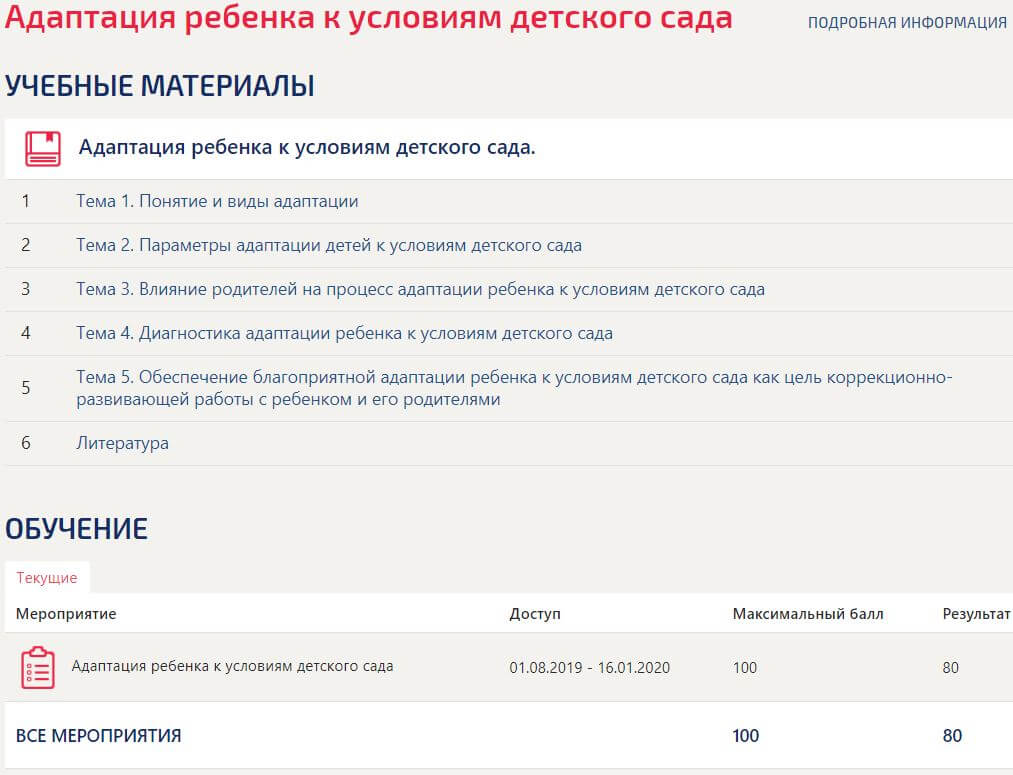 sinergey information about the seller and his items
offlineAsk a question

According to most researchers, the adaptation of children in kindergarten is quite difficult ... and the physiological process

Homeostatic balance of the individual with the requirements of the external environment is considered in the framework of ... direction
psychophysiological
psychodynamic
humanistic
behavioral

One of the indicators of a hypersocializing pathogenic type (classification by V.I. Garbuzov) is ...
excessive love for a child
anxious suspiciousness
excessive demands on the child, control
unstable parenting style., ambivalence

It is not true that social factors complicating the adaptation of a child to a preschool educational institution can be attributed ...
features of educational activities
family composition
the formation of skills and personal qualities
parents age

The ability, skills and activities of a parent to care for and raise a child, according to V.N. Myasishchev, is ... a component of parenthood
behavioral
emotional
social
cognitive

It is not true that the diagnosis of adaptation involves the participation of such subjects of the educational process as ...
Methodist
educator
parents
psychologist

The theory of cognitive dissonance reveals adaptation issues and is considered fundamental in the framework of ... direction
psychodynamic
alloplastic
psychophysiological
behavioral

The egocentric type of pathogenic education (V.I. classification
Garbuzova) is characterized by ...
the child is completely dependent on either the father or the mother
excessive love for the child
pragmatic style of communication with the child
ignoring the needs of the child

Adaptation within the framework of the theory of cognitive dissonance correlates with the concept of ...
adapted
coadaptation
maladaptation
correlations

It is not true that the indicators of adaptation of children to preschool educational institutions can be attributed ...
speech impairment
immunity reduction
sleep disturbance -
malnutrition

Homeostatic balance of the individual with the requirements of the external environment is considered in the framework of ... direction
psychophysiological
humanistic
psychodynamic
behavioral

Monitoring the dynamics of adaptation is carried out from the first .... child visits to a preschool educational institution
of the day
of the month
of the year
half year

According to V.I. Myasishchev, the emotional component of parenthood is ... feeling like a parent
objective
subjective
rational
self-centered

With a mild degree of adaptation, the characteristic symptoms of a fav

In the period of adaptation of a child to a preschool educational institution, three stages of the adaptation process are distinguished: acute, compensation
passive
depressive
subacute
aggressive

It is not true that, by the definition of A. Ya. Varga and V.V. Stolin, a parental attitude is ...
features of perception and understanding of the nature of the personality of the child-
a system of diverse feelings towards a child -
a system of behavioral stereotypes practiced in dealing with a child -
representations of yourself as a parent., knowledge of parental functions

In the framework of the psychodynamic approach to adaptation, his supporters believe that if for the purpose of adaptation a person changes himself - it ... adaptation
socio-psychological
autoplastic
search engine
alloplastic

In the framework of the psychodynamic approach, adaptation is considered as a process ... of the interaction of the individual and the environment and at the same time as the result of this process
passive
symbiotic
conflict
positive

Rejection (emotional rejection) as one of the pathogenic types of education according to the classification of V.I. Garbuzov is manifested in ...
complete lack of interest in the child
in the form of a condescending attitude towards the child
excessive demands on the child, strict regulation and control
denial of the importance of the personal merits of the child

It is not true that according to the classification of V.I. Garbuzov, pathogenic types of education are classified as
egocentric education
hypersocializing education
authoritarian hyperprotection
rejection (emotional rejection)

Parenting, according to Professor Virginia Satir, depends on ...
number of children in a family
marital nature
the number of years of married life
spouses age

It is not true that the classification of the types of parental relationships of A. Ya. Varga and V.V. Stolin includes such a type as ...
egocentrism
symbiosis
infantilization
cooperation

Related to item "Adaptation of the child to the conditions of the kinder":

Adaptation of the child to the conditions of the kinder